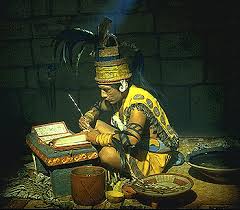 There are three knowledge circles in ancient civilizations of the world. Three levels where wisdom is expressed and transmitted. In the first circle is the "word".

"The word masters, the tlatolmatinime, as they were called in their language, were priests, poets and sages, speeches authors, dedicated to dominating the difficult art of expressing thought with the appropriate tint and the metaphor that opens the way to comprehension. They were, as an ancient text reads "lip and mouth artists, owners of the noble language and careful expression". Many of them were also teachers in prehispanic education centers, where, along with the best of prehispanic cultural traditions, also taught also tecpillatolli, or noble and careful language. "These same word masters created what was then called icniúhyotl, fraternities of poets and sages..."  (Miguel León Portilla. 1980)

n fact, from the very origins of human wisdom, it is has been guardedtransmitted in the language of the peoples. As example we would say that the Bible, the oldest printed book in the world, was guarded-transmitted throughout centuries by the Hebrew people.

"The Mesoamerican people had developed a speech which was manifested in various circumstances, in songs, speeches and divine or human important events remembrance." Such speech can be described as a form of oral tradition systematically learned in schools and temples.

For transmission, priests and sages used their books or codices. The Mayans read their books in the strict sense the logo syllabic sequences. "The Nahua and amoxohtoca Mixtecs, "continued" the paintings and glyphs sequences also included in their codices ". (Miguel León Portilla. 1968)

With the word, knowledge is transmitted directly. In the Nahuatl language our ancestors treasured valuable concepts such as: "topial in tlahtolli" the legacy of our word, "to-pializ" what is our responsibility to preserve, "yuhcatiliztli" action that leads to exist in a certain manner, "Toltecáyotl" all Toltec institutions and creations.

Were our grandfathers, our grandmothers,

our great great grandmothers, our ancestors.

the story repeated as a speech,

was left for us and came to inherit it

to those that now live,

to those that came from them.

will never lose it,

will never forget it,

what they came to do,

who came to settle,

their black ink, their red ink,

so in the future

The Anahuac civilization had in their lingua franca, the Nahuatl, words which reveal the depth of their thinking and systematized wisdom. For example: "amoxcalli" library; "tonalámatl" Book of day counting and destinations; "xiuhámatl and tlacamecayoámatl" book of the years and lineages; "teoámatl" book of divine things; "cuíca-ámatl" book of songs; "lemic-ámatl" book of dreams; "amoxohtoca" follow the path of the book; "altehuehuehtkahtolli" ancient words of the people; "huehuehtlahtolli" testimony of the ancient word.

From the last one, is a fragment of words from a mother to her daughter:

"Now my little girl, dove, woman, you have life, you are born, you've come, and youve fallen out of my heart, my chest." Because he has forged you, molded you, made you, your father shaped you slim, your Lord. Hopefully you will not wander suffering on earth. Will you live next to people, along with people? Because in hazardous, in dangerous places, life is difficulty. So, concede a little to people, make them deserve their fame, their honor, their warmth, their sweetness, their flavor, our Lord."  (Miguel León Portilla. 1991)

In the second eccentric circle, knowledge is guarded-transmitted by stones and books. Indeed, wisdom was transmitted by "writings and drawings in leather, stones, , paper or in imposing constructions". This form of knowledge has been almost eternal and universal to all civilizations, but knowledge needs to be read-interpreted, and is no longer direct and "pure", since it has to be deciphered or decoded. As an example we can mention pyramids, steles, codices and frescoes. In the three hundred years of colony, all this wisdom and science, was chased by spaniards because they represented the very demon. In the 19th century were, to some illustrious visitors "Antiquities, primitive and curious" that they looted and destroyed with impunity. In the 20th century they began to consider them with an "aesthetic and artistic value", instrument only to generate foreign currency from tourism, especially in the second half of the 20th century.

"The interest of the study of archaeological sites orientations is precisely the fact that constitutes a different calendar principle from what is represented in steles and codices." It is undoubtedly a principle alien to western thought. The "writing" used in this case, is the architecture and its coordination in the natural environment. A codex system is embodied in the landscape: hills and other natural elements, or also with artificial markers in form of symbols or buildings built in these places." (Johanna Borda. 1991)

However, all the engravings, sculptures, reliefs, frescoes, codex paintings, vases, and textiles, contain a high philosophical value. Indeed, our ancestors iconography is still present today, while we, their children cannot rediscover it, and not only know the symbols meaning, but what is essential; embody them!, to build a better Mexico. These symbols are still here: crafts, decoration and some symbols, which because they are there we are not interested or we do pay enough attention. The most prominent example is the national shield, representing the esoteric Toltecáyotl symbol and that professor Laurette Séjurné in her wonderful book "Thought and religion in ancient Mexico" presents it in a dazzling and clear way.[1]

The third knowledge cycle, people have guarded-transmitted it in "religions". The most important peoples knowledge is structured in a religion, so that it is accessible and easily the masses can govern their lives with the ethical and moral principles based on the wisdom that allow them to live in harmony, orient their existence towards higher consciousness levels, and thereby achieve spiritual transcendence.

To gain some understanding of the ancient Mexico religion, first requires knowing the first knowledge cycle wisdom, then, try to untangle the puzzle from the Aztec postclassical period through changes and transgressions by Tlacaelel [2] to the Toltec legacy. As well as those by the spaniards in the colony, through their biased written texts. And recently, foreign researchers through their Eurocentric and Marxist vision, in which four ceramic pieces (tepalcates) and a "class struggle", intended to decipher an ancestral legacy of spiritual nature, which deals with the prodigious mystery of human existence.

The religion of the Toltec classical period, which was the most filtered creation from the Olmecs and that the Toltec refined and spread throughout Cem Anahuac, producing a thousand years of harmony where there were no wars, human sacrifice, nor Señoríos [3]. Most of the spirituality and mysticism of native peoples and peasants of contemporary Mexico are more deeply rooted in concepts of sacred and divine, with which the Toltec taught to live in balance and harmony to the peoples of ancient Mexico.

[1] See page 112 of the cited book.
[2]The Aztec Cihuacoátl that conducted the philosophical and religious reform of the Toltec philosophy and created a new mystic-materialistic-warrior ideology.
[3]Government form under which a Señor or Señora had political, economic and religious control over the people and predetermined territory. But that did not have a Kingdom characteristic.